RushCon 9 was elevated from the norm! 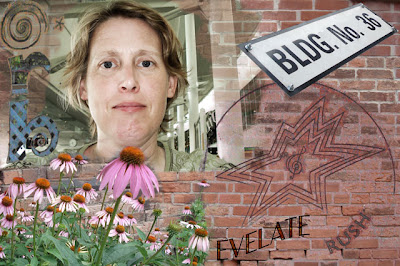 This is a montage I created to celebrate my time in Toronto and at RushCon 9. It doesn't cover all of the fun, late nights, friendship, laughing, and cool RUSHiness of the week, but it does represent my trip to the Distillery District, RUSH's star on the Canada Walk of Fame (and Li'l RUSH pub crawl), the obligatory evening on the Orbit Room's back patio, and me at YYZ, awaiting the plane that will take me home.

The purple coneflowers were growing along the sidewalks in the Distillery District. They, along with lavender, daisies, and other wildflowers, were planted by a local group and look great against the turn-of-the-century brick warehouse buildings.

Evelate isn't a real word, but rather a "Rushism." As we are elevating, deviating, and escalating from the norm, we get to the point of being "evelated." You can put whatever definition you wish to it.

Last year, I took a picture of myself at the Toronto airport which I turned into "Consumed by a Single Desire," seen in http://aveddy.blogspot.com/2008/06/consumed-in-single-desire.html . I decided to make it a tradition to see how I'm feeling after a week of late nights (working til 2am) and early mornings (up at 7am to do more work), which are needed to make RushCon a success.

We had a great year, with two guest speakers, Martin Popoff and Michael Mosbach. They were fun and interesting speakers and people. RUSH Karaoke was great, with eight fans singing RUSH songs - without benefit of provided lyrics and timing. The winner, Lisa, got to sing a song with the RUSH Tribute Band, Limelight, during their show for the RushCon 9 Tribute Band Concert at C'est What. You can see her performance on RushCon's YouTube Channel.

The RushCon Charity Auction was a huge success! We raised over $4500 CND, all of which is donated to the Daily Bread Food Bank of Toronto, a non-denominational food bank. Our nine-year grand total in charity donations is over $50,000 CND.

The RushCon organizers, myself, Judy, Mary Jo, Jillian, Kristy, and Holly, really rocked this year and we came out of RushCon 9 eagerly anticipating next year's convention. We also had lots of help from Phred, Kam, Steve, Jeremy, Rob, Robert, Rodney, Todd, Stevie, Bev, and Max. Plus tons of others who helped, donated, bid on auction items, and came to RushCon.
Created by AV eddy at 6:32 PM

John Cleese Is Watching You